She was a mess when I first met her. We spent years talking about how she could get it together again. She did! She stole millions of hearts, including mine. I wouldn’t be who I am if it wasn’t for her. A love letter to my awesome, world-famous ex. Her name is LEGO.

The year was 2004, the place was a little ghost town in Denmark. I was a design management consultant, called in to help out a company that I had known very well as a child. It wasn’t the same company anymore. What if that was the problem? A thought I couldn’t shake.
The invitation was signed by Per Hjuler, boss of the design department. I walked through the door of a building that looked like a primary school at most, not knowing that I would keep walking through that door for years to come. Not knowing how deep our relationship would become.

At the heart of the design department

I was welcomed by a well-considered Norwegian named Paal. I asked him how he ended up at LEGO. ‘I interned here during my design education. Designed a model over the course of 3 months. Then they offered me a job, so I quit school and never returned home.’ It would turn out that his story was quite common at LEGO. Striking, for a company that has lost its grip…

Why do successful brands loose their grip? One big threat is dilution. A brand gets diluted when it moves away from its core. Porsche building SUV’s instead of sports cars. Red Bull doing cola. The obvious consequence of dilution is that customers get alienated. But it goes much deeper, into production lines, distribution and HR.

Over the years, LEGO had grown the amount of unique bricks it produced from 900 to 17.000. Some of those bricks were flexible. Some were textured. Many were convenient for building stuff. It’s tough to create a space ship with only 4-by-2’s. Convenience can harm creativity, one of LEGO’s core values. Had LEGO lost its creativity? It was only a question in my mind, but Paal answered it as he opened the next door.

Right there and then I knew: this isn’t going to be any consulting project. If I need to travel here every week and live from my suitcase: whatever it takes to get this company back on track, I will do. I was in love.

The room we entered, was the heart of the design department. It was full of people at work. Adults, obviously. They were playing with LEGO, walking around and laughing a lot. The walls had project management boards made of LEGO. Everything was bricks. The air was buzzing with playfulness and creativity. There was even a corner where actual kids were playing with new models. What a beautiful engine for new products! Right there and then I knew: this isn’t going to be any consulting project. If I need to travel here every week and live from my suitcase: whatever it takes to get this company back on track, I will do. I was in love.

As our relationship progressed, so did the topics we worked on. But it all started with making design more efficient and effective. It almost feels like polar opposites: ‘design’ and ‘efficient’. I spent a good 2 years with LEGO’s design leadership team to rebuild their design process and integrate it with all other functions. One thing this led to: the amount of unique bricks was cut tremendously. This streamlined production immensely, and challenged the design team to bring their creativity to the next level. With less textures and shapes to work with, they still managed to create miraculous vehicles, buildings and worlds. Word had spread about this Dutch guy influencing such change. I had become a familiar face at LEGO design. But design was only the start. 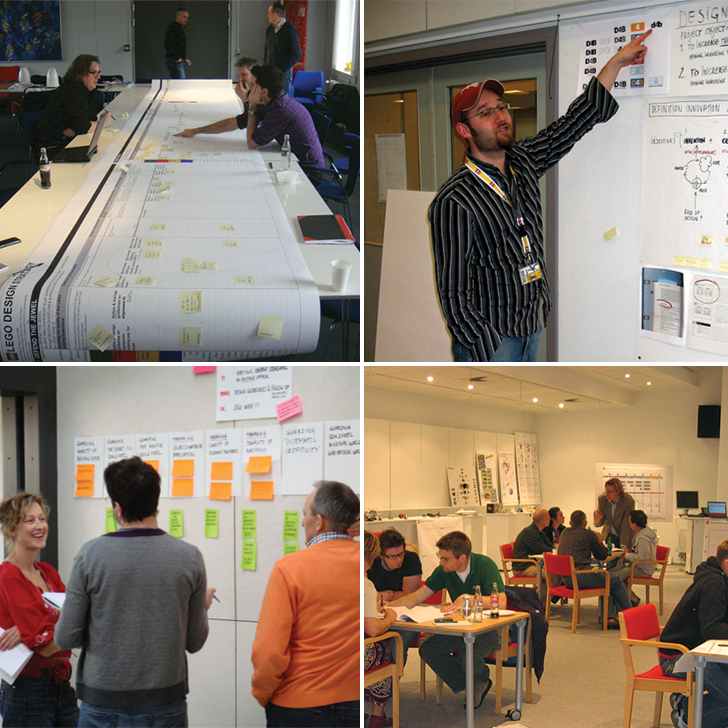 Soon enough, the influence of our strategic changes started paying off beyond efficiencies. New, solid collaborations started building with marketeers, supply chain, Digital. Design had become so  attractive, that everybody wanted to be friends with it.

The LEGO Design Academy was built

After rebuilding the process came a redesign of the growing design organisation. How could LEGO retain their awesome designers and give them ways to grow? I met with Christoffer. He used to be a baker and a so-called AFOL, an adult fan of LEGO. His shed was full of his miraculous creations built from LEGO bricks. He attended a fan-event, and was offered a job. That same day, he signed a contract as a new LEGO designer. A dream come true. He lived that dream until he got promoted to a design management function where he didn’t get to spend much time building. LEGO was promoting great designers into mediocre managers. The reorg was led by Torsten Bjørn, and together we developed a brand new development plan with a design-specialist track next to a design management track. Both could grow all the way to director level. We also built an internal LEGO Design Academy that helped designers grow. It was this reorg that led me to not just care for the company, I was now part of the family. We went for drinks. We visited each others houses. I almost bought myself a place in Billund. We took it to the next step: I went on holidays with some of my LEGO friends. We explored new frontiers. And work wasn’t different: the real LEGO boom was about to happen.

Between 2004 and 2016, LEGO’s design department grew massively. My team of consultants and I were working hard to bring fresh perspectives to design leadership, strategy, education, processes. New LEGO businesses were started, bringing new opportunities to designers ready to step up. Digital games, movies, LEGO Friends, the LEGO House: my team and I were asked to contribute. So I ended up working with Mike to brief and select the experience agencies that would design the LEGO Brand House. I sparred with Rosario who created the strategy that would bring LEGO to girls. I was part of the inception of those blockbuster successes by Matthew. We all felt it: LEGO was well on its way to become to number one toy company in the world.

The company grew. Rapidly, and in all dimensions. This growth was based on a strategy strong enough to carry all that growth. Everything was awesome! I saw so many new faces, and some of the faces I had become familiar with, moved to places out of my reach.

The beginning of the end

One day, Paal walked me to the cab that would bring me back to the airport. It was 12 years since that first meeting. He had reached Senior Director level at LEGO New Business Group by then, and we hadn’t actively worked together in a while. Something was coming.

‘I’m thinking about moving on’, he said.
Silence. Everything turned silent.

My mouth said something that my brain hadn’t ordered it to say: ’I understand’.

I had been part of the reason why. We all had. We had built a brand into success beyond imagination. We had built a world-leading design organisation with hundreds of people. Everything was awesome. If ever there was a time to move on, this was it.

Paal had been instrumental to LEGO’s growth, but the company could stand on its own two without him. So he moved on.

A sense of realism trickled into what had been a passionate marriage for years. Everything was working well. So why was I still there?

I didn’t. For the simple reason that I loved LEGO too much. It made me think though. A sense of realism trickled into what had been a passionate marriage for years. Everything was working well. So why was I still there? I wasn’t the only one to have such thoughts. New people were deciding about my presence as a consultant to LEGO. People who hadn’t built up a years-long relationship with me. Who looked at me for what I did in the present. I was loosing grip, but not ready to let go. Until I did.

A serious amount of introspection led me to conclude: I will love LEGO forever. Much of the work I’ve done for it, might by now have dissolved or gotten obsolete. But that’s only part of it. Before and after me, people have left the company. And I still cherish warm friendships with them. We call, we look to contribute to each others lives. And now that I can take a step back, I can say: I love my awesome ex.

Previous article Crossing over: 6 learnings from innovating at 1 NGO, coming from 100 corporates.
Next article Ex-LEGO: a new job description and community